How do you give your child meaningful consequences while also giving enough praise? 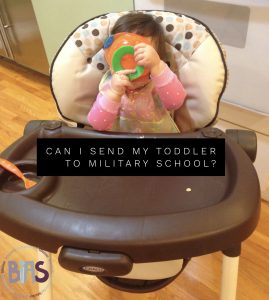 Yesterday, I received a text message from my cousin.  The message said:

“Can E get shipped to your house for three days.  She needs military school.  I’m just tired.  Everything is a battle and her new mantra is, “Mama, I’m just trying to make a deal.”

Let me start by saying that I responded with a big old “no.” See, I am affectionately referred to as E’s “fairy godmother,” and much as I love spending time with her, I don’t want to lose that status!

I went on to tell her that toddlers don’t usually get accepted into military school and offered up a strategy.  “Teach E to compromise, rather than the one-sided deals she had gotten so good at making.”

She then responded with this statement: “I feel like when you do things like run off in the middle of the store, you should be punished.  It’s hard to give meaningful consequences and give enough praise.”

She was seeking a tangible behavioral strategy to use with E.

This got me thinking, what is a quick and easy strategy that any parent could use on the go?

One suggestion I gave was to make an outing checklist.  An outing checklist is an easy way to outline a few rules for your child to follow, as well as identifying a special reinforcer that could be earned.  The best part is that you could scrawl this on a piece of scrap paper found at the bottom of your purse.

See my example below: 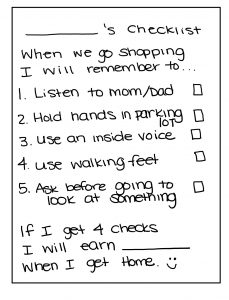 The best part about a checklist likes this is that it allows a parent to praise the things their child does well. But also address the area(s) where their child needs a little extra practice.

But what about the consequences?

Any BCBA will tell you the importance of positive reinforcement.  Research says you should provide others with 4 positive statements for each corrective statement. However, some days parenting is just hard.  You consider sending your 5 year old to military school.  You dream of a day when you can just run an errand with your kids without needing a pocketful of treats.

First, establish a positive reinforcement system that works for your child.  For most children, including E, electronics are highly reinforcing.  There is seemingly endless supply of games to play or videos to watch.  If this is the case for your child, you may want to isolate a few specific times of day when they are allowed to play with one of these devices.  By limiting access, it ensures that the chosen reinforcer remains desirable.

With this in mind, a parent can easily whip up a chart like the one below: 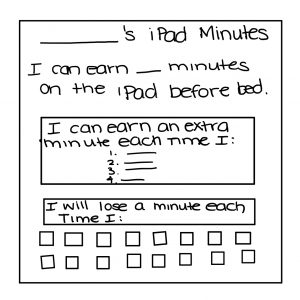 It may even be beneficial to just start with the “earning extra minutes” section.  Once your child understands the power of a chart like this, you can introduce the “consequence,” which is otherwise known as response cost.  Response cost is when something that has already been earned gets taken away.

It is important to be sure that if you decide to take away minutes, that you are also going above and beyond to find extra reasons to give minutes back.  Remember the 4:1 idea of praise to corrective statements.  That rule applies here as well.

Here is how a completed version of this chart would look: 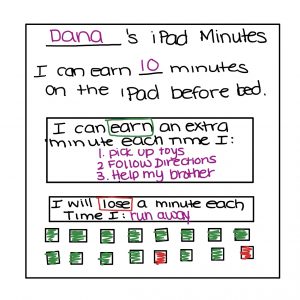 Both of the strategies shown above allow parents to give meaningful consequences while also delivering praise… and the best part is you won’t feel you have to send your toddler to military school.

This site uses Akismet to reduce spam. Learn how your comment data is processed. 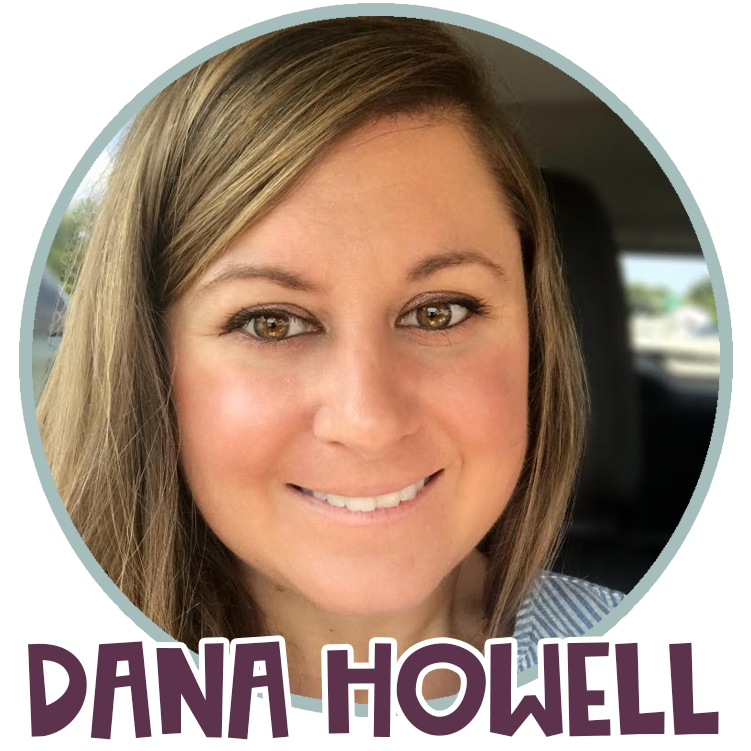 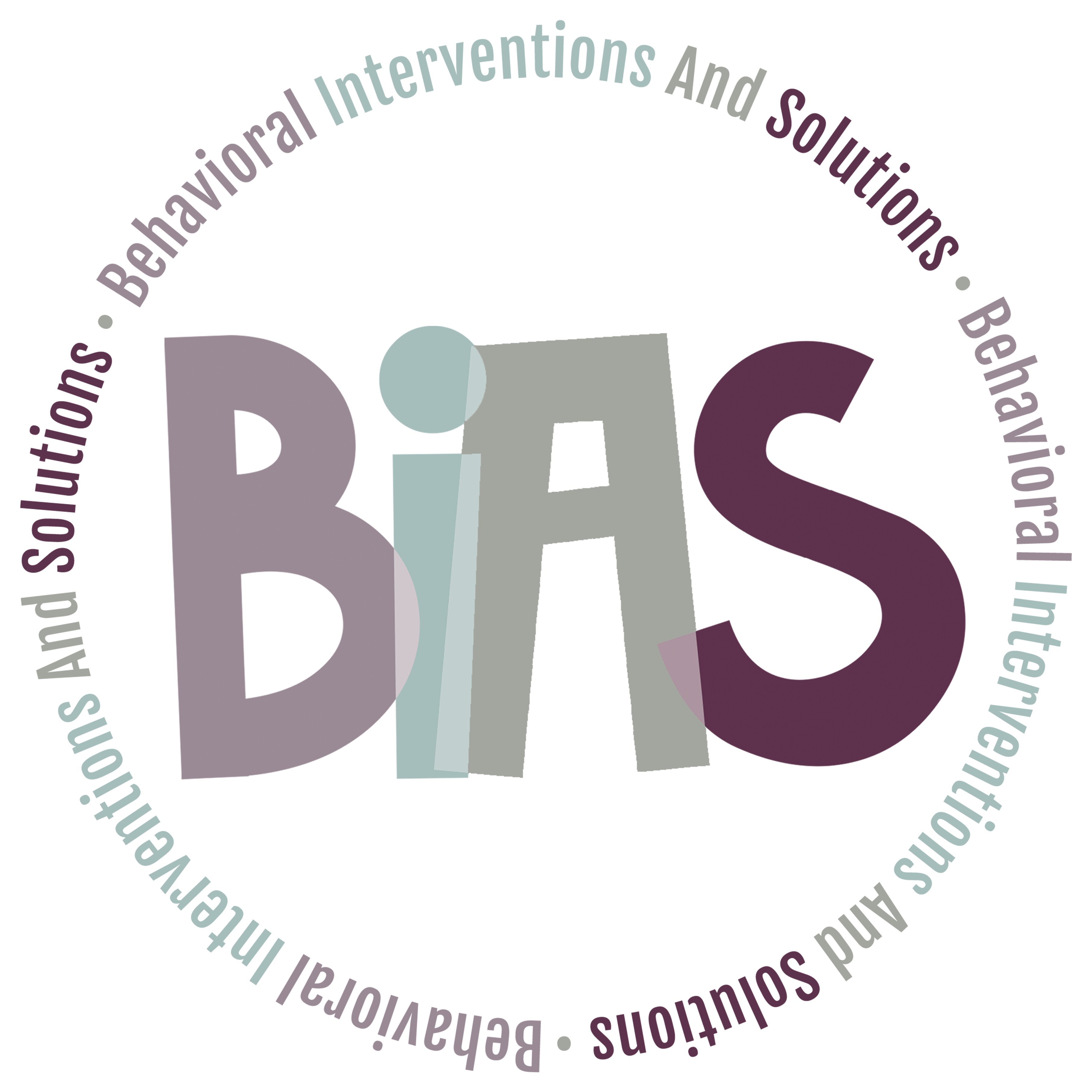 Punch cards are a fun twist on a sticker chart and can be used in many ways!Much like a loyalty card at your favorite coffee shop, punch cards are a great visual for Increasing desired behavior using positive reinforcement. Punch cards can be used across settings and are a convenient way to build skills and teach delayed reinforcement.And the best part is that punch cards can be used for more than just BEHAVIOR.Some examples include:✔ Academic Progress Monitoring↪ Task Repetition or Completion⚠ Behavior Support☺ Social Emotional Learning✏ Chores or HomeworkIt is important to start with a small, easily achievable goal, which will ensure that the reward is earned quickly and will increase the overall value of the punch cards in the future. Therefore, when thinking about a goal (especially in the beginning), you want to make sure it is something that can be met AT LEAST ONCE (but maybe even several) times per day.If the goal is something that can only be met once, think about the individual steps it takes to get to that goal and assign each one a punch.Remember, just like with goal setting in your personal life, the harder the goal is to achieve, the bigger the reward should be at the end.Happy Punching!Visit the link to learn more. #biasbehavioral #behaviormanagement #positivereinforcement #punchcards #specialeducationteacher #tipsforparents ... See MoreSee Less

...I have an exciting announcement! 🎉A few weeks ago, Amanda from @theprimarygal reached out to me, asking if I wanted to join her on an episode of her podcast.While I love talking about all things behavior, I was definitely nervous to record an unscripted conversation on this topic. Luckily Amanda knows how to ask all the right questions and by the end of the hour, I felt like we had been friends for years.Make sure you FOLLOW along, as she continues to interview a variety of professionals in the special education field. Her interviews tackle topics ranging from data collection to creating independent workstations and everything in between.I will link the Spotify episode in the comments below! ... See MoreSee Less

Have you tried to flip ↪ the script🗒 when talking about challenging behavior?Children engage in challenging behavior when they don't have a safer, faster, or more effective way to get their needs met.This can be hard to manage, especially when the behaviors are relatively minor in intensity but seem to occur ALL THE TIME. Somewhere along the line, those behaviors are being reinforced, and by doing so, they remain a persistent part of that child's repertoire. So, what is the solution?! Start by FLIPPING THE SCRIPT. Instead of solely focusing on the CHALLENGING BEHAVIOR, ask yourself what LAGGING SKILL the child needs to be TAUGHT to FUNCTIONALLY COMMUNICATE their wants and needs.Next time you find yourself in the middle of a behavioral episode, I encourage you to take a step back and LOOK/LISTEN to what the child is ACTUALLY trying to tell you. #biasbehavioral #functionalcommunication #flipthescript#specialeducation #SPED #spedteacher #specialed #behavioranalysis #behavior #behavioriscommunication #bcba #aba #RBT #schoolcounselors #schoolpsychologist #schoolslp #behaviorspecialist #behaviorsupport #behaviorchange #behaviormanagement #classroommanagement #weteachsped #iteach #iteachsped ... See MoreSee Less

BIAS - Behavioral Interventions And Solutions, LLC added a Shop on Website button to their Page.